So Rich and I are looking for work. It’s an anxiety producing lifestyle with not as much standing work as we’re used to (read: sitting on our butts searching the computer for jobs). So when I woke up and wanted pancakes this morning, I thought I should have healthy ones.

Since this is one of many things that I make with my smoothie maker that’s not a smoothie, I thought I might just make a new category: “Things I make with my bullet” – of course until someone starts sending me endorsement checks, I’ll just recommend that a solid smoothie maker, strong blender, or food processor will do the trick. 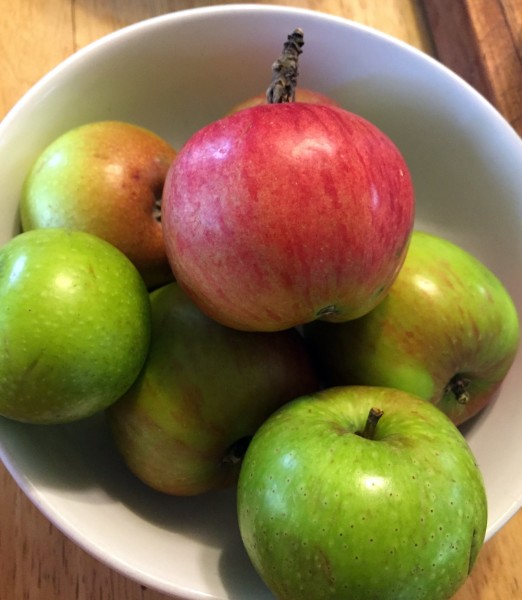 This is the season of apples. We had three sets of visitors yesterday and two of them offered us apples out of the blue, one had these lovelies with her so we couldn’t say no. 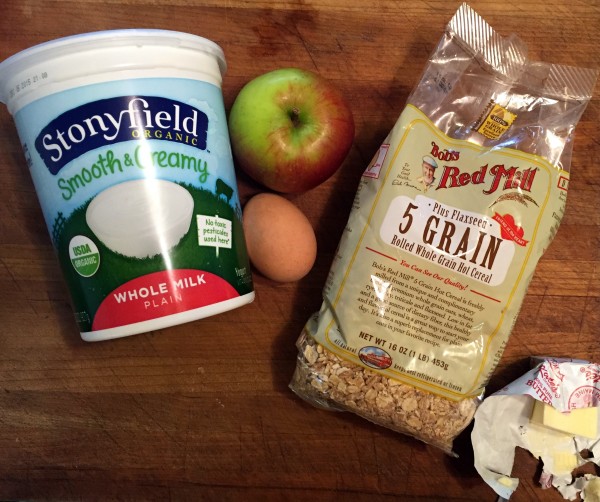 No milk in the house, but yogurt does the trick. No plain oatmeal, so we’ll try this Five Grain Cereal.

First, turn that cereal into flour in your machine of choice, just put one cup in dry and whiz it. I’ve made oat flour this way successfully in blenders and food processors, the smoothie maker is just more convenient and easy to clean up.

Then I added one of those beautiful apples – include the skin but do core because the seeds contain arsenic – 3/4 cup of yogurt, 2 Tb water just to be sure it’s liquid enough, about a quarter tsp each ginger and cinnamon, half a tsp baking soda, pinch of salt, and an egg. Whiz again until fully combined.

Then do the pancake thing. 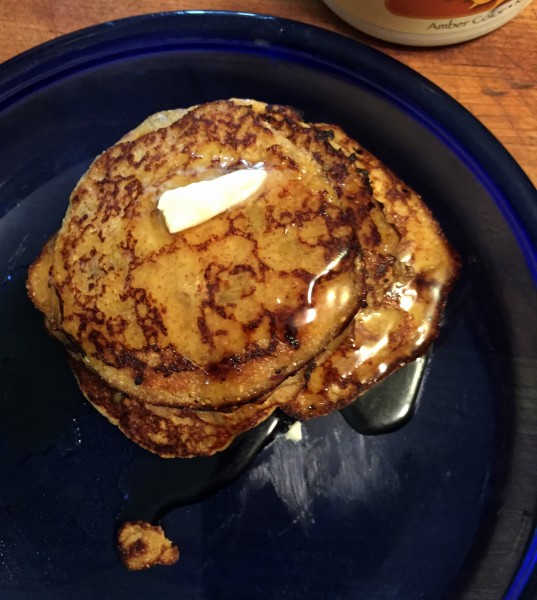 You know, put some light oil and a little butter into a hot pan or griddle. Pour a quarter cup or so of batter in pan for each so’s they don’t touch. Wait for the bubbles to form then flip. When the second side browns, keep in a 200 degree oven until you’re ready to sit down and eat them, or just munch on them out of the pan. Makes about 15 pancakes or enough for 3 in our house. Yeah, the butter and syrup might negate some of the healthiness, but it’s better for me than the alternative.

My husband and I didn't have children, we had a restaurant. For twelve and a half years we poured body and soul into Cleonice Mediterranean Bistro. We worked closely with local farmers, fishermen, and food artisans, doing our best to support our local community. We made great friends, beautiful food, and had a lot of fun. As Rich and I rediscover ourselves as our own beings outside of the all-consuming restaurant we have time to share our recipes and reminisce about Cleonice.

This blog has been archived

This blog has been archived and is no longer being updated.